WASHINGTON DC – Barack Obama Endorses Joe Biden For President. Former US President Barack Obama, on Tuesday, endorsed Joe Biden for the next presidential elections. Saying that Biden can unify and heal a nation struggling through some of its darkest moments.

According to details, the formal backing by Obama is the latest boost for Biden’s surging candidacy. And a further sign that Democratic leaders are rallying around the party flag-bearer. This comes just six months before November’s election.

In a 12-minute long video on social media, Obama said the following. “Joe has the character and the experience to guide us through one of our darkest times. And heal us through a long recovery. I believe Joe has all the qualities we need in a president right now.

The cherished endorsement comes at a time of deep national anxiety. With the vast majority of Americans under stay-at-home orders due to the coronavirus pandemic. The virus has killed nearly 25,000 people in the United States. 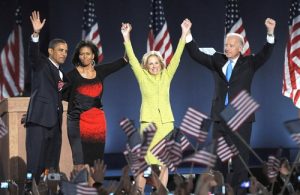 On the other hand, Joe Biden promptly expressed his thanks in a tweet. “Barack, This endorsement means the world to Jill and me. We’re going to build on the progress we made together, and there’s no one I’d rather have standing by my side.”

Biden is the Democratic Party’s presumptive nominee to challenge Trump. This is after his lone remaining opponent Bernie Sanders dropped out of the race last week. The leftist US senator from Vermont also endorsed Biden on Monday, saying it was time for Americans to “come together” behind Biden.