12 Dead in a Plane Crash in Kazakhstan

The Fokker 100 aircraft, operated by Bek Air, got into trouble shortly after departing from Almaty, the Central Asian country’s commercial centre, on a pre-dawn flight en route to the capital Nur-Sultan. It lost altitude during takeoff and broke through a concrete fence before hitting the two-storey building, Kazakhstan’s Civil Aviation Committee said. It was not immediately clear what caused the crash.

Almaty heath care authorities initially put the death toll from the crash at 15 or more but later revised the figure down to 12 dead. They said 66 people were taken to hospital, some of them in a serious condition. 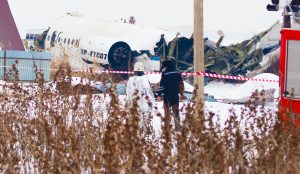 Kazakhstan’s Deputy Prime Minister Roman Sklyar told reporters that “Before crashing, the aircraft touched the runway with its tail twice, the gear was retracted.” He further added “A commission will establish whether this was pilot error or technical issues. The runway was in an idea condition.” The plane had been carrying 93 passengers and five crew, and Kazakhstan’s interior ministry said the captain was among those  killed.

Kazakh President Kassym-Jomart Tokayev tweeted, expressing condolences to the victims and their families. Tokayev declared December 28 a national day of mourning and appointed Prime Minister Askar Mamin to head a commission to investigate the crash.